Bacteria on Your Towels - Path 411 Pain

Bacteria on Your Towels 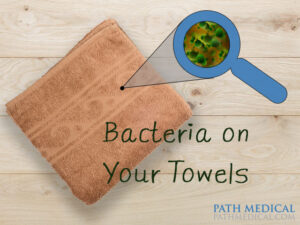 The kitchen and bath towels have their designated areas ready to be used by hand washers. What you may not be aware of, though, is the amount of bacteria that could be harbored on these towels.

Many people do not wash their hands properly, some even skip the soap. In these cases, there’s a likely chance that their germ ladened hands are then smeared across your kitchen or bath towels leaving remnants of those germs behind.

Tiny microbes are then sitting on your damp towel in their favorite breeding ground. Soon the entire towel is infested with bacteria just waiting to latch on to the next person. Bathroom towels tend to collect coliform bacteria which could lead to diseases such as Salmonella or Escherichia coli.

Towels are prone to spreading infections and illnesses. Sharing towels could leave you vulnerable to contracting various diseases, therefore, it’s suggested to always be on top of your towels.

Never use the bathroom or kitchen towels for your face. Placing your mouth, nose, and eyes in direct contact with the kitchen or bath towel grants an entry-way for the bacteria to get into your body.

It is recommended to change the towels as often as possible. If they have a funny smell, toss it in the wash. Try to change out your towels every two days. If you have a sick person in your household, every day would be fine.

Be smart about your towel use and practice effective hand washing to really kill bacteria.

Deadliest Holidays to Drive on in the U.S.